The race tracks have always attracted a lot of people, not only punters, but sports enthusiasts as well. The sport of kings, as it is commonly called, offers numerous opportunities of social and business gatherings spiced up with the thrill of horseracing. The tracks, the races, the crowds cheering their favorites on, and the thrill of betting can make quite an interesting weekend for anyone, especially for sports enthusiasts.

However, today, the popularity of horse racing is not what it was thirty years ago, when people were crowding the racetracks to cheer on their favorite horses, and when betting on the racetracks was done exclusively through betting stations on-site. Today, the game has changed completely with betting off the tracks and online betting becoming available.

According to Ladbrokes, the second biggest spectator sports of Britain is not sustainable anymore. Since 2005, the cost of racing has doubled, due to the increase of the horse-racing statutory duty on off the track bets, and the cost of media rights. In order to broadcast races in the shops, bookmakers need to pay for the media rights. The rise in media costs and the statutory levy are causing many bookmakers to close their shops, or cut horse betting altogether. In turn, the horse racing industry suffers a lack of income, especially when the fact that about a fifth of the industry’s income comes from horse betting. In turn, horse breeders cannot meet the demand with domestic horses, and more and more foreign foals are brought in to fill the racetracks.

There are many reasons why the horse race industry is considered to be in decline. The first reason is the increasing popularity of football and other sports, who grab the attention of betters worldwide a lot more than horse races. Placing a bet on a horse race is a difficult, analytical task one has to do carefully in order to place a winning bet, and lucky wins are rare. On the other hand, football betting has only increased, shown by the rise of popularity in online betting on sports.

This brings forward the second reason for the decline. Online gambling at online casinos is becoming more and more popular, especially in Britain. This is not surprising, considering that today’s young generations are more attracted to means of online entertainment, rather than following horse races and attending horseracing events at racecourses. But, even before the digital age, the race tracks always attracted a more mature demographic, and young fans were rarely seen.

The public perception of horse races is not exactly favorable either. A dominant perception is that the sport is not fairly conducted, and that drugs and other means of enhancing a horse’s performance are being used by a lot of trainers, causing a major decline in the fairness of the games. It does not help that there have been situations in the past where a horse’s performance has magically improved in one day. This can affect many betters who turn to betting on other sports, where they believe they will have more chances of winning. In addition, there is always the presence of trainers and jockeys with whips in their hands, ready to lay them on the horses, further increasing the perception that horse racing is a cruel sport where the lives and health of the horses are not taken in consideration by the trainers and jockeys.

On the side of the coin, horseracing is becoming more and popular. In 2015, attendance to the racecourses increased by 5.3 percent for the third year in a row. This increase can be attributed to the innovative entertainment methods of the races. Some of the races end with concerts and music, and children under the age of 18 get free entrance to many venues, and some of them even have free race nights, allowing many people their first ever sight of a horse race. As such, attendance to the racecourses rises steadily, with many people becoming more attracted to the race and the venues, meaning that the horseracing industry is not yet in such dire straits. Many racecourse venues apply more means of attracting a younger crowd and promote horseracing, and as such, they help out the local communities, demonstrating the importance of horseracing not only as a means of entertainment, but as a source of welfare for the community.

As it can be seen in the image below, the interest in horse racing has had a steady increase in the last five years. 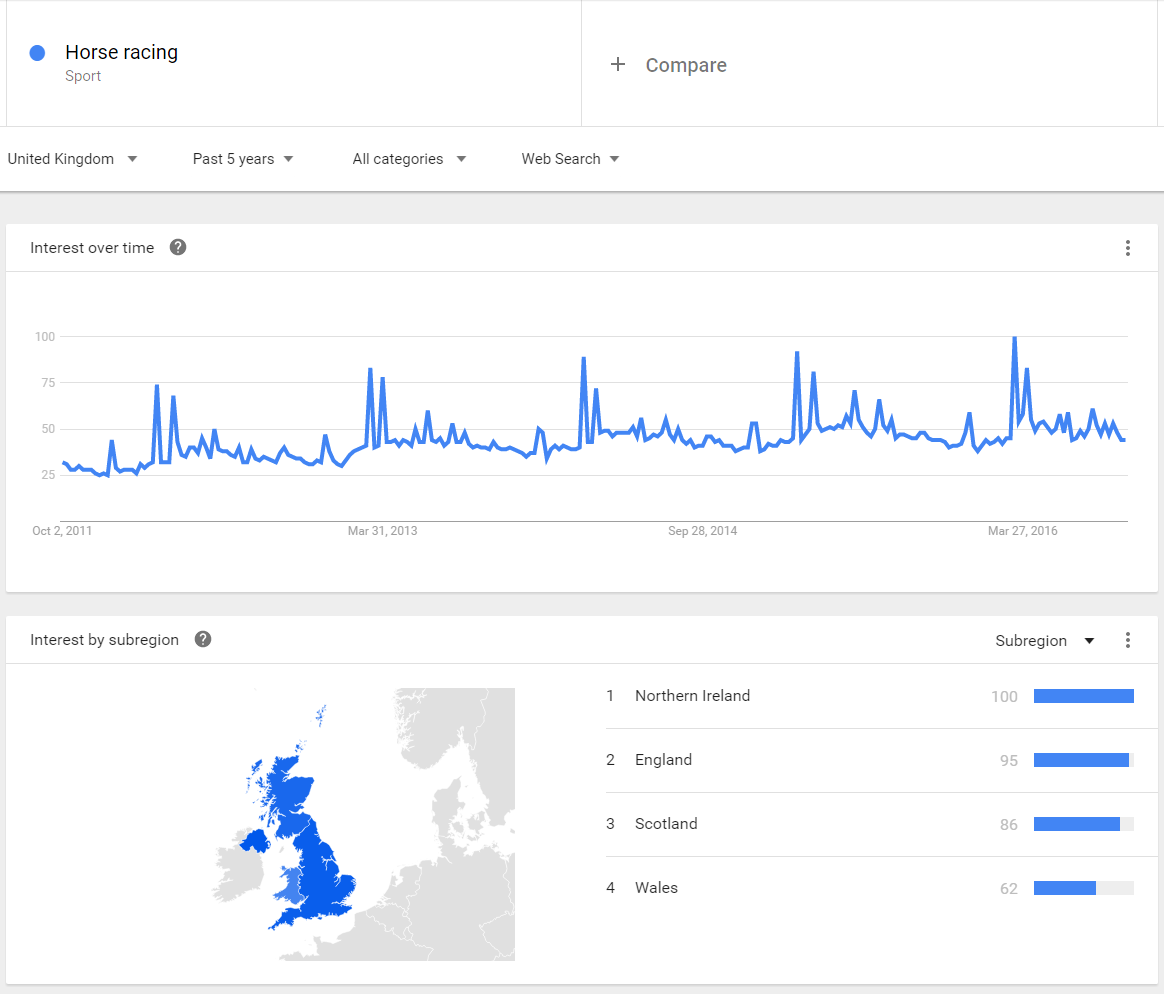 This can be confirmed by the analysis made by Smart Live Gambling is that while online gambling and betting as a whole is on the rise, betting on horses leads with an astounding amount of 65 percent, compared to betting online and offline on other sports and online casino gambling. According to the study, horserace betting is the most popular activity for young men and women from the ages of 25 to 34, and that almost 15 percent of the money a gambler spends in his or her lifetime is dedicated to horserace betting. Online betting with a bookmaker follows far behind with 44 percent, offline sports betting with 37 percent.

The steady rise of interest in horse races coupled together with the fact that betting on horses leads over other forms of gambling and betting, aided by the increase of attendance at the racecourses by both young and mature fans, allows the conclusion that the horse racing industry might have suffered drawbacks and declines over the past decade, but that its trends are on the rise. Last year, attendance of the tracks was at a high, with over six million people attending more than 1400 races, and the betting turnover was over £10 million. The sport of kings is one of the UK’s main forms of entertainments, and it is estimated that it will remain so in years to come.